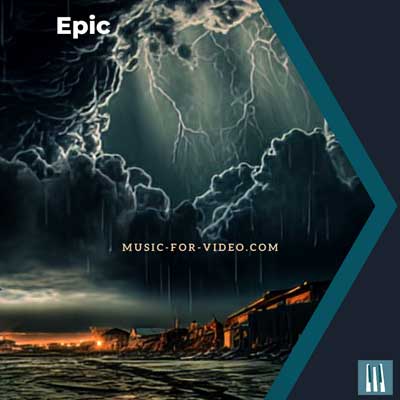 What is an epic cinematic sequence without an epic soundtrack to accompany it? This is the question every director and producer must ask themselves when they are putting together their creations.
Royalty Free Epic Music Tracks for Action, Movie, Trailers, Sport, Games and Film. Orchestral Production music. Simple Affordable License.
Very suitable for Sport and Action footage. Aggressive Action Hybrid Tunes
Free testing. No registration or personal details are required.

No more entries to show...

What is an epic cinematic sequence without an epic soundtrack to accompany it?
This is the question every director and producer must ask themselves when they are putting together their creations.

The answer is clear to any half-seasoned cinema-goer or movie buff – leave your climactic sequence without the musical boost it needs and see your production seriously fail to reach its potential. Pair it with the right Epic production music at the right time, however, and watch its power soar.

But maybe you don’t know where to start. Maybe you simply can’t think what music could give your production the power and dramatic tension it needs. Maybe you want it all delivered with a thunderous momentum that acts as the icing on the cake. Yet you’ve seen plenty of action flicks and there’s definitely something you have in mind…

Everyone recognises the sound – the relentless percussion, the heart-racing tempos, the furious string sections. It’s been used to nitro-boost trailers and action sequences for years, and for good reason too! This is Epic production music and this is the sound your production needs.

Some Epic stock music tracks give the feeling of tension, others danger, yet all will keep your audience on the edge of their seats. Perfect for action features, sporting clips, explosive trailers and even more.
This specially-compiled playlist offers a broad snapshot of our Epic royalty free Music selection. Diverse and thrilling yet offering plenty of variety, our Epic playlist is a great place to start. Nothing will beat a grand Epic track for impact, so strap in and prepare for the ride…

When you know your production needs a bold and hard-hitting piece of music behind it you can almost feel it, even if you’re not the most knowledgeable film critic. The momentum of the feature rolls on and gathers weight, and at a certain point the narrative almost screams for it.
Tensions build, stakes rise, determination set in, and as the climax approaches... only one thing can give this sequence, and the whole movie, the impact it needs.

That one thing is the style of music that has permeated cinematic major action sequences for years now. Those furious string sections, that relentless percussion, those breakneck tempos. We’ve all heard them, we all know them. This is Epic production music.

Epic production music is characterised by the feeling it gives rather than any set rules. However, in its pursuit of grandness and climactic bombast there have been certain patterns established that many tracks in this style tend to follow. Typically speaking Epic royalty free music is mostly written to accompany film trailers and finale scenes that are high in action and tension, and they are largely structured to be complementary to this.

The result is that most Epic production music tracks start off quieter and build fairly rapidly to accommodate the shorter length of film trailers. This also goes well with action sequences, many of which have their lengths limited to preserve the tension and stop them from dragging.

Epic royalty free music tracks also have one or more dips in the intensity throughout. This serves a number of functions. It keeps the track interesting and stops the audience from being fatigued by boost after boost of intensity that soon starts to offer less and less impact.

They also allow for short breaks where plot development and speech between on-screen characters can more comfortably occur. This is important as film makers quickly realise that having your characters compete with a bombastic Epic track to be heard is not a good look!

These dynamic dips also frequently reduce in volume to a short period of silence or at least a very light continuation of the previous section. This makes it very easy for producers and directors to insert the next piece of music that is to come in, whether it is something different to change the mood, or another epic track to continue the action.

A common way for epic tracks to start is with a relatively gentle string section introducing one of the motifs of the song. Even in the quieter parts of the song we hear the string sections typically playing rather fast, often using semi-quavers throughout that keep the tension alive even when they have no accompaniment. This effect is amplified by the tempos at which these tracks run, tempos which frequently zoom along at bullet-train speeds. This gives the strings a furious and indomitable feel, combining their natural elegance with a refined and impressive-sounding aggression.

The piano is often found in there too, acting more as an accompanying instrument than the main act as it sprinkles melodies and thrusts majestic chords into the mix. Likewise tracks often feature choral accompaniments that generally do not make their appearance in full until the climax of the song.

Yet they can frequently be found adding small accentuations to earlier parts of any given track too. It is in the climactic parts of the song that their true utility is found, however. When the peak section of the song is reached and the full force of the choir is unleashed we can truly understand its grandeur and how it can be used for the most impact. As any experienced Epic music consumer will know, once the choral elements reach their peak you know the song cannot get any higher.

Yet the piano and choral elements remain important accessories to Epic music, and besides the strings it is really the percussion that lends Epic music a great deal of its power and dynamic qualities.

On paper the percussive elements of Epic royalty free music seem rather unsuitable, with them having a very modern and almost synthetic quality in parts compared to the rest of any given Epic track’s components. We have virtuosic strings, the tasteful addition of the piano and skilled singers layering notes and rhythms upon one another to powerful orchestral effect. Yet the percussion often does not seek to play this same game.

The drumming on these tracks is often characterised by its sheer intensity and relentlessness. In this way it matches the strings, yet its focus seems to be on driving the aggression and force of the track using whatever means it considers necessary.

When Epic royalty free stock music tracks are analysed it often feels like there is a tangible elegance to most of their components, even if they are designed to accompany scenes of adversity and battle. Yet the percussion serves chiefly to hammer in the force of the song however it can. The drums are often high in the mix, never afraid of making their presence known and mercilessly driving the momentum of the song.

Combined with the high-tempos, this gives the percussion a very prominent place in the composition of many Epic tracks you will hear.
It should be noted too that there are frequent sound effects and electronic embellishments used to accentuate certain elements of the tracks. These are used for dynamic purposes as the song shifts from one section to the next. They are generally brief and non-intrusive, and will probably go unnoticed by a large proportion of listeners.

The purpose of Epic production music is to take the audience on a wild ride, however, and these electronic elements do just that as they swing the momentum from one section to the next. As unseen as they are effective, as powerful as they are overlooked, electronic embellishments in Epic production music can serve a vital function.
Of course not all Epic royalty free music tracks are created equal, and some will satisfy your needs more than others. Maybe you need something that builds up a little more gradually, maybe something that hits immediately, or maybe you want one that carries the same power but simply doesn’t sound like the rest.

Epic stock music can be as varied as any other genre, and you may find more measured, less percussive tracks in there alongside mid-tempo selections and those that don’t seek to make fury their only goal. Such tracks are typically paired with trailers rather than heroic finale scenes but still fit the ‘Epic’ tag for their power and dramatic enhancement. They can be used in any number of scenes where their sound may fit with the on-screen content, and whether they are suitable for your feature is ultimately up to you.

Whatever your needs may be, however, we are sure to have something to satisfy. Our catalogue contains an extensive range of Epic royalty free music albums of such a broad variety that even the pickiest producer can find that elusive ideal track.

We understand such a wide selection may be overwhelming to some. So to help you get an understanding of the different types of Epic stock music available in our catalogue we have put together this playlist of select Epic production music tracks currently available via Orla Music. Sit back, press play, and prepare to be blown away.

Create a free account to use the playlist Feature