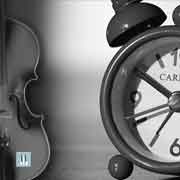 One of the proudest achievements we have made as a species is our ability to capture and measure time. Since their earliest iterations the devices we use to do so have had certain distinctive sounds associated with them, from the eternal gentle rush of sand through an hourglass to the near-silent movement of the arms of a priceless wristwatch, and everything in between.

For decades now we have had digital watches that only make noise when we want them to, silently and perfectly measuring the passage of time through their LCD screens. As their popularity rose in the later 20th century you could have been forgiven for thinking these modern gadgets would replace the classic clockwork mechanics for good, consigning these precise wonders of engineering to the bins of history.

Is this a yearly subscription?

NO, this License is a One time Price. NO subscription. NO Annual Renewal.

Where can I use the music?

All the tracks can be used for All media, Worldwide, in Perpetuity.
Use the music where you need it, from social video to Podcasts to TV shows blockbuster movies.

As a Lifetime Music member, you can download as many tracks as you need. Just remember that membership only covers a single user, and we don’t allow automatic downloading tools.

Does the license Include BROADCAST?

Do I have acces to future releases?

YES. With Lifetime Music Membership, you are a member with full access to all the music catalog and updates forever!
Membership never expires.

Surprisingly, however, this did not happen and as time moved on it seemed the traditional construction of the clock and wristwatch still remained heavily in demand. Just why such ‘outdated’ technology remained popular in the face of cheaper and more functional options could be extensively debated. One probability, however, is that the never-ending tick-tock of the clock has woven itself so deeply into our collective memories that we find it unsettling to be completely without it.

All of this comes in a small 97mb uncompressed file which allows you quick access to a range of clock-related sound effects for your project. Yet despite the ubiquity of the sound of clockwork throughout the world, some may wonder just how such samples could be used in their productions.

The first point would be to think about what these sounds are usually associated with in media. The ticking clock, for all its cultural significance, is usually used in conjunction with two rather less pleasant feelings – waiting and tension, or sometimes both together. From the hospital waiting room to the prison cell, we see the minute hand slowly creep around the face of the clock as the hour hand remained resolutely immoveable regardless of how much time seems to pass. You may not be able to stop time but you can reduce it to a tortured crawl, all to the accompaniment of that insistent and tireless tick-tock-tick-tock.

Such is the power of this that merely the sound of those clicking hands can evoke that very same feeling of frustration and powerlessness. Tension too is a closely related by-product of this, and is most effectively felt when waiting is combined with a pressure or danger of some sort. In these events the unending and unchanging percussion of clockwork tirelessly ramps the anxiety of the situation up. 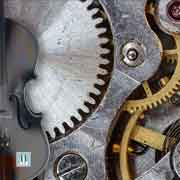 Think of an interrogation room or a stand-off, where the tension can be made so thick that it could be cut with a knife. To impart these qualities into your video productions where needed makes clock sound effects an invaluable component of your creative repertoire, and in this free sample pack you will get as many as you need. So download it using the link below and see how these sound effects can make your productions come to life.