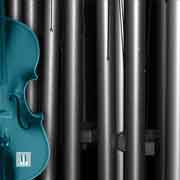 Some sounds elicit the kind of emotions you can’t quite identify. They hover somewhere between happiness and tension, offering the kind of ambiguity that is both powerful and rare. Their qualities can sometimes make such sounds difficult to use, and in the hands of an unskilled producer can easily make for an unsatisfactory outcome.

Then there are other types, those whose ambiguity works to their strengths due to the neutrality that underscores their essence. Such tracks can be used in a bright and optimistic setting or a dark and threatening one, depending on how they are established.One such example of this kind of flexible ambiguity can be found in the use of chimes.


Their elegantly tinkling notes come and go in the blink of an eye, short and delicate, combining in their dozens to create the almost ethereal sounds they are known for. The tones that can be elicited from chimes are dependent on a number of factors based on their construction. They can demonstrate a higher or lower pitch, determined by their size and shape, though even the lowest pitched ones have that unmistakeable twinkling quality.

They may also have quite the range, with one set of chimes demonstrating both higher and lower registers if built with this intent. Finally is the variation in the size of chimes, with big and small creating different combinations of sounds for different effects. Smaller ones may gently whisper like drops of water falling into a puddle, while the larger types make the kind of noise that feels like it is rushing over you like some furious wave.

The beautiful sounds created by chimes were not lost on Music-For-Video.com, who felt it worthwhile to take steps to allow video producers the use of such samples in their work. In line with this, Music-For-Video.com have release a chimes free sound pack that includes 69mb worth of high quality samples in wav format. This pack contains 31 samples of varying kinds to meet all your needs. There include 10 clusters of chimes, 10 chime upstrokes, 10 chime downstrokes, and one full panning chime effect. The variation on offer here means that if you can visualise a certain chime sound, you are likely to find it within the 41 samples in this free pack.

Those wondering how they may be able to use these samples will not find a shortage of good places to put them. The tinkling innocence of chimes gives them a dreamlike quality, like that of a children’s storybook or classic fairy-tale. This does not limit them to nocturnal use, however, as their relaxed tones go well with gentle rays of sunshine as much as moonlight.

Yet there is something particularly well-fitting when it comes to chimes and a night-time atmosphere. There is something mysterious about these sounds, if not necessarily sinister, bringing to mind buried clues and hidden secrets. But even so, this only scratches the surface of how this free chimes sound effects pack may be used, and any curious video producers would be doing themselves a great service by seeing how these versatile and beautiful samples can bring their creations to life.

Thousands of music tracks. Broadcast use is allowed.